Zach Galligan’s first major and most widely seen role was as Billy Peltzer in the 1984 film Gremlins. 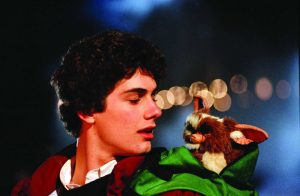 After the success of the first Gremlins film, he appeared in comedy fantasy film Nothing Lasts Forever (1984), and followed on from this with a number of television features, including the highly rated suicide drama Surviving (1985), opposite fellow newcomer Molly Ringwald, and in PBS’ The Prodigious Mr. William Hicks (1987), which featured Galligan in the title role as a turn-of-the-century prep-school troublemaker. Galligan returned for The Return of Hickey and Hickey and Company, and received critical recognition for both performances. In 1988, Galligan starred as high school student Mark Loftmore in the Anthony Hickox’s cult horror comedy Waxwork opposite Deborah Forman, Patrick Macnee & David Warner. In 1990, he returned as Billy Peltzer for Gremlins 2: The New Batch, which was received well by genre fans and critics alike.  In the horror thriller Psychic (1991) with Catherine Mary Stewart, Galligan played a student who begins to have psychic visions of a killer, only to find that he himself is suspected of committing the murders.

He also had blink and you’ll miss him cameos in both Anthony Hickox’s Hellraiser III: Hell on Earth (1992), and Warlock: The Armageddon (1993).

Zach appeared as himself and as the gremlin Stripe in The Keith & Paddy Picture Show: Gremlins Christmas Special (2018) where Keith Lemon & Paddy McGuiness chaotically recreated the film with the aid of a troupe of “celebrity” guests which included John Thompson, Kara Tointon, Sue Pollard and Les Dennis.

In 2019, he was cast as ‘Director Zach’ along with Kevin Smith, Vinnie Jones, Stan Lee & Danny Trejo in the Jason Mewes comedy film Madness in the Method in which Jason Mewes attempts method acting in order to gain more respect for himself in Hollywood, instead he slowly descends into madness.