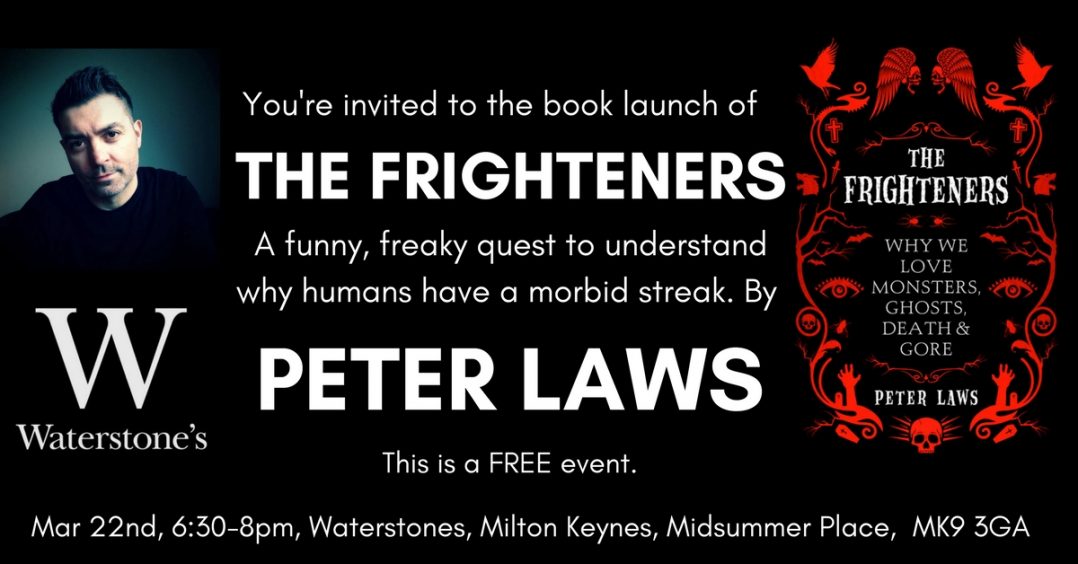 I’m a church minister and I’ll be at HorrorConUK in 2018. But fear not…I’m not coming to tell you off, or cast demons out of you for loving horror. I have no plan to thrust a ‘Praise Jayzus’ pamphlet in your hand while demanding you stop dressing as Jason, circa Friday 13th Part III. I’m coming because I’m a horror fan too. In fact, I was into scary movies way before I even set foot in a church. My morbid gene kicked in pretty early, actually, with teachers asking my mum whispered questions at Parent’s Evening…

English: Why does every story have to have a gut-munching werewolf?
Art: Must every piece of art work have a severed head? We’re running out of red crayon.

Heck, I even remember playing horror themes on the Glockenspiel in Music. I was seven, and I’d teach myself how to play classic John Carpenter hits. Starting with The Thing (easy) then moving on to Assault on Precinct 13 (intermediate) and up to Halloween (advanced). Then, I moved on to even more impressive levels for a seven-year old: like Creepshow or The Exorcist or the funky little riff from Fright Night. The music teacher looked at me funny, as I recall.

But horror isn’t just an interest to me. It matters. It’s a thing. Whether it was remaking Romero’s Dawn of the Dead on a VHS camcorder at school, or me paying thirteen English pounds yesterday, just so I could have a replica of the lollypop-cross that David Soul uses in Salem’s Lot. This stuff is meaningful to me. And the thing is…I reckon that if you’re planning to spend cash on coming to HorrorConUK in a creepy old Sheffield Steel Mill, to hang out with Dario Argento, or to dress up like Rawhead Rex, then horror clearly matters to you, too. But let me ask you a question…do you ever get those funny looks, like I do? Do family members or friends ever wander into the living room, and roll their eyes at the stuff you watch? Do you ever feel like a freak when they frown and say, ‘Why though? Why does it always have to be stuff with screaming?’

People seem to ask me this question all the time, especially since I’m an ordained church minister. I guess vicars are supposed to be ‘professional nice people’. Folks end up asking: ‘Why on earth does horror matter to you?’ My answer to them is The Frighteners – Why We Love Monsters, Ghosts, Death and Gore, a hardback from Icon Books, which explores why human beings have a morbid streak. And we do, by the way. Not just the HorrorConUK crowd, but I mean humans in general. One look across the history of culture and art will show you that our species spends a surprising amount of energy pondering the demise of ourselves, and others. I wanted to find out why. 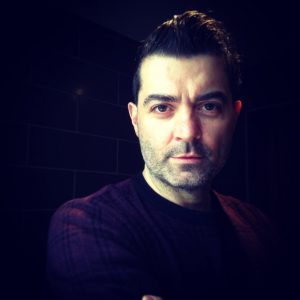 Finding answers has sent me on an 18-month quest from the snowy streets of a Transylvanian village and the underground crypts of Rome to the funeral parlours of Hertfordshire. Along the way I’ve hunted werewolves in Hull, had the BBC strap me to an electric chair and been chased by zombies through a nuclear bunker in Essex. I’ve held a lock of Charles Manson’s hair in my hands and spent a genuinely pant-wetting night in a haunted hotel. I’ve met the real-life vampires who drink their boyfriends blood, the woman who keeps her own coffin in her lounge and the historian who dealt with a doctor’s bad diagnosis by sleeping overnight on a mortuary slab. All to understand how a love of the morbid can actually enrich, rather than ruin society.
Critics might disagree, of course. They may argue that a truly enlightened species would remove all elements of the morbid from their culture. Like the Gebusi, a remote tribe from New Guinea. When anthropologist Bruce Knauft studied them in 1980 he found a society where initiation rites were pain-free, and violent stories and aggressive drama were forbidden forms of entertainment. Sounds like a haven of safety, right? Wrong. The Gebusi tribe had the highest homicide rate of any known culture, because they had no safe outlets for their darkness, their aggression.

Most cultures have opted to keep these outlets, and we’ve pondered monsters, ghosts, death and gore throughout history. I see no sign of us giving it up, either – especially when HorrorconUK continues to grow each year. When we gaze at the body on the road, it’s not that we enjoy death, but rather our brains are hungry for information to help us avoid a similar fate. We tell stories of violence and brutality, not to promote real aggression, but to find safe ways of dealing with that which frightens and disturbs us. We also gaze into the dark, simply it’s fascinating. And who can blame us, when the topic of death and dying holds 100% relevance for every single one of us. To think we wouldn’t be intrigued by such topics, is absurd. Like you guys, the good folks of HorrorconUK, the stuff you watch and the fangs you wear might be a shock to the mainstream. Yet the presence of the morbid can prompt us to embrace life, and contemplate the deepest questions of all. That’s certainly what I found, when I threw myself into the bizarre, controversial, often funny and strangely life-affirming world of morbid culture.

I’ll be at HorrorConUK this year, signing copies of The Frighteners, as well as the novels which I’m mainly known for. I hope you can drop by and say hi, and even if you don’t – just know this. Despite those frowns and eyerolls you might get – you’re not a freak. You’re not weird. You’re doing the most natural and normal thing in the world. With your Pinhead outfit and your autographed Elm Street House and your Critters cup-cakes you’re pondering reality, in wild and creative ways. 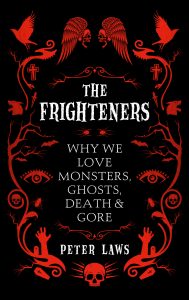 The Frighteners (Icon Books, 2018) is out on hardback, eBook and audio on March 22nd, 2018. If you’re in the Milton Keynes area, why not come along to the book launch – details below).