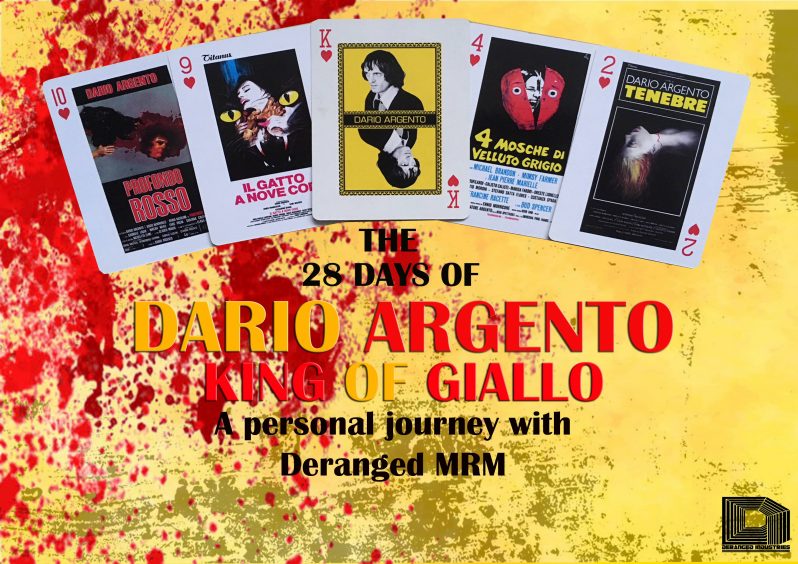 Blog A Reflection on Dario Argento By Matt Rowan Maw

As far back as I remember I have always wanted to make films, it was either that or be an inventor or spy. However, whilst I was enamoured with directors such as Alfred Hitchcock and Martin Scorsese, it was the films of Dario Argento that left an indelible impression on me and a resolve to produce material heavily influenced by this stylistic auteur, as well as a life long dedication to collecting physical media of all things Argento.

With this in mind I was overjoyed when I was approached by HorrorConUK to give a personal reflection on Dario Argento ahead of his guest visit to the show in May 2018.

When I was a kid, I had a paper round, and those newsagents were a canny bunch, because they knew I was going to spend my hard earned cash in their shops, which is what I always did. After a while of frittering my money away on comics, magazines and sweets, one fateful day a new magazine arrived with a lurid front cover that featured the Phantom of the Opera, it had such a tempting title The Dark Side. 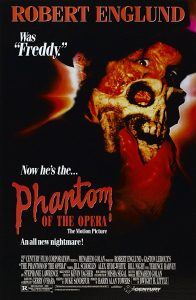 Inside the magazine there were full colour pages devoted to both old and contemporary horror films, and I was giddy with excitement (although the whole magazine intrigued me and had me instantly captivated) however, it was their coverage of one particular film director, and their consistent high regard for him and his films that struck me, and many other readers, I am of course talking about Dario Argento. 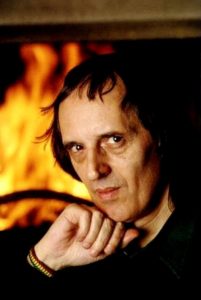 The first piece I ever read on him was an article by renowned Argento biographer Alan Jones about George A Romero teaming up with Argento, and FX legend Tom Savini to produce Two Evil Eyes, from then I was hooked. I still have that issue No.1 and every other issue right up to the latest issue 189 – I told you I was a collector right? After this, I vowed to track down every previous film from Argento’s oeuvre, I was going to be shocked, elated and forever in gratitude for his artistic visions … or was I?

Being a VHS film collector in 90’s Britain was a bit frustrating, let alone being a horror movie collector, let alone a Dario Argento movie collector, and if you did manage to snag a VHS copy of an Argento film from somewhere it was cut to ribbons or a ropey 5th gen quality rip. The BBFC and distributors were unkind to Argento films, and believe it or not youngsters and post millennials, collecting Argento movies in good quality prints pre-internet was like questing for the Holy Grail! I think the only official releases on VHS of Argento’s work I could acquire were Inferno from Warner Bros. It was the first ever Argento film I had watched and boy did I love it! I could handle the missing footage of a cat eating a mouse and it was in scope too, rare for VHS those days. I also tracked down a truncated version of Opera renamed as Terror at the Opera, which I still had a lot of time for. 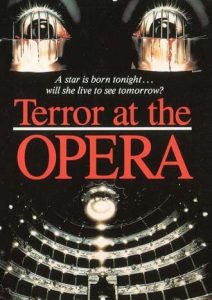 I ventured to college where I met a kindred spirit who had a magical machine called the LaserDisc Player. JB used to bring in movies transferred to VHS and it was then that I saw the difference between my versions and his; the Japanese don’t mess around when it comes to Argento, and they like to see his films as pure as the driven snow. From then on, he hooked me up with a couple of Argento flicks Deep Red and another I can’t recall, plus a new movie from some guy called Quentin Tarantino that was about some rabid dogs or something, that we all loved when we saw it at college one sneaky lunchtime, JB was a very good friend indeed.

Finally, there was another key player in my quest for VHS Argento (their name will not appear here) but stumbling across their tiny stall in an arcade in the early 90’s was very fortuitous for me, on a shelf next to a copy of A Clockwork Orange was a copy of Tenebre! I couldn’t believe it! I grabbed it, turned it over, it looked legit or at least it was Argento’s film in some variant, which if you know Argento’s films there can be many variations of the same film in different territories. I had found the film that I had most wanted to see (based on imagery I had seen in a handful of publications). 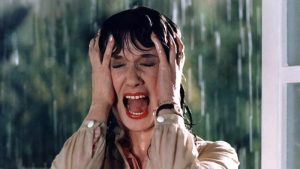 I went to the counter and asked how much? He said a price I can’t remember, it was not cheap, but I would have laid down a weeks worth of my waiters wages on it by then. He said if I liked it I could see the list of his other movies from under the counter that ‘his mate’ could transfer to VHS; I said “Yes please”. I perused the list and saw Suspiria on there, and Four Flies on Grey Velvet; a film that none of my friends could find. 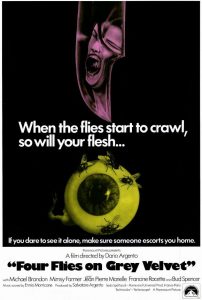 I put an order in, and would collect the following weekend. As for my Tenebre find, I got home and watched it for the very first time, and have done again and again and again throughout the years. The guy who owned the stall now runs a chain of stores, and I always wondered if the BBFC censors had inadvertently helped kick start his fledgling business, as I suspect they did for many others.

DVD was really the beginning for Argento’s new found digital support after years of scrappy prints and unreliable dupes, the golden age was here. Companies like Anchor Bay, Blue Underground and many others really did open the eyes of even the most dedicated Argento movie fan. With their superior releases that showed just how beautifully framed Argento’s films are, and how every single detail in the frame is positively bursting to give you information. I took great joy in seeing companies suddenly appear to acquire the distribution rights to Mario Bava, Lucio Fulci, Dario Argento and a host of other Italian filmmaker’s catalogue of films because they knew the market wanted them, and we really did. Time and time again another rare treat would be released as a spanking upgrade, although if you wanted to sample these delights you had better have got yourself a multi region DVD player, as the UK didn’t catch on till a bit later.

Over the years I have had countless DVD versions of Argento’s films from various companies most of which I have upgraded to Blu ray. Whilst there is something to be said about the halcyon days of watching movies on 4.3 TV’s on VHS, I don’t think this was ever the case with Argento’s films. They were often badly panned and scanned; The Bird with the Crystal Plumage had many details cut, and Deep Red or the badly dubbed Opera were edited to the point of ridiculousness. There has never been a better time to be a Dario Argento fan, and it is a joy to see these films on screen just like he intended us to. There are 4k restorations being released left right and centre from many distribution companies (Google them!).

So now in February 2018 it’s the perfect time to dim the lights and fire up the movie player for the 28 days of Dario. Join Matt on his Argento Odyssey @deranged_mrm on Instagram #28daysofdarioargento #horrorconuk

Matt Rowan Maw (Deranged MRM) is a University of Arts London Art & Media Production Tutor and an independent filmmaker who is co partner of Deranged Industries an independent production collaborative, and founder of fEMINA Giallo a Deranged sub label dedicated to Giallo inspired productions featuring strong female representation. He is also a VJ who has recently joined forces with Profondo Mondo a VJ outfit specialising in Euro horror film imagery & VS Euro soundtracks. Matt has also produced the annual HorrorConUK teaser trailers since inception as well as VJ sets for the ‘Face of Steel’ screens in Magna for HorrorConUK, he has even more up his sleeve for this year!