Ivy is a short psychological horror-thriller about a man’s struggle to come to grips with his deteriorating mental state stemming from losing the love of his life.

Rick is a young man living in a nice apartment who seems to be having difficulty going outside ever since his girlfriend mysteriously left. The people around him seem to be trying to push him toward leaving the apartment and moving on with his life, but not everything is as it appears to be…
Teaser

After suffering a brutal attack, eight year old Kuo is found in the woods without his eyes. With the help of his stuffed animal Bainfu, whose bright red eyes Kuo uses as a guide, he sets off on a journey to find the mysterious faceless woman who stole his sight from him.

Simon is an eight-year-old boy who seems to have everything from life. He’s a handsome child, he’s rich yet unhappy. He senses that there’s something wrong with his life and this leads him to wander off thanks to his fervid imagination. His greatest wish is to leave the materialistic world behind since he isn’t fond of it. That’s why the only present he wants for Christmas is for Santa Claus to take him away to live in his fairyland toy factory. At the same time, a secret that his family has been keeping for a long time suddenly comes to the surface and it is feared that the worst might happen soon. The expectation for the stroke of midnight on the night before Christmas is transformed into reality for everyone on the eve of something truly different. Something terrible that might happen.

Leto is a psycho-neurotic spinster who dreams of having the perfect nuclear family. She is unable to control her obsession with a family living in her neighborhood.  As her past unravels and catches up with her she begins to spiral into a state of absolute delirium. 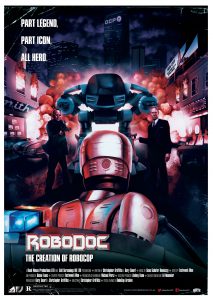 Directed by Paul Verhoeven, produced by Jon Davison and written by Ed Neumeier & Michael Miner, first released in 1987 RoboCop has since become one of the most iconic and successful movies of the 1980s, a movie that was well ahead of its time and has left a lasting impression on fans across the globe. RoboCop is a movie that many fans watched as children when they were too young to understand the social commentary of this R-Rated movie, yet they were instantly hooked on the future of law enforcement.

From Dead Mouse Productions Ltd and Cult Screenings UK Ltd, the makers of Leviathan: The Story of Hellraiser and Hellbound: Hellraiser II and You’re so cool, Brewster! The Story of Fright Night comes their new documentary RoboDoc. A fully independent retrospective into the making of RoboCop and its cultural impact over the last 30 years. Supported by dozens of the original cast and crew RoboDoc is made by fans of the movie for fans of the movie.

Seven strangers are invited to a house to be offered a large inheritance, instead they find themselves trapped in a deadly game to the death.